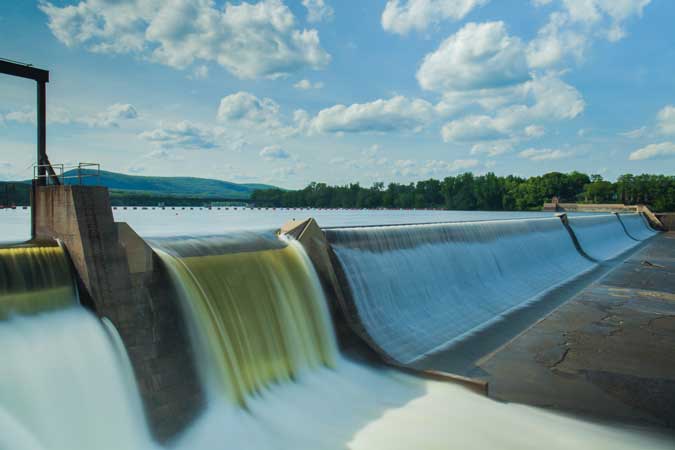 Hydropower extracts mechanical energy from water, transforming it into electrical energy to generate electricity. Water in the environment often has both gravitational potential energy and kinetic energy, which can generate electricity using a generator. Note that traditionally this does not refer to the energy obtained from flowing water in the form of tides. In the case of obtaining energy from the tides, the term tidal power is used. The amount of potential energy stored in a body of water at a hydroelectric dam is measured using the height difference between the head race and tail race, known as the elevation head (part of the hydraulic head). Roughly 1/6th of the electricity in the world comes from hydropower facilities, while values in the earlier twentieth century were much higher. In some countries around the world, hydroelectricity is the dominant form of electrical power generation.

Countries such as China, Canada, and Brazil are the leaders in total hydroelectricity generation with capacities of 200 GW, 89 GW, and 70 GW respectively. Other notable producers include Russia, India, Norway, Japan, and Venezuela (which is almost completely dependent on hydropower). See the data visualization below for more statistics on hydroelectricity around the world. Figure 2. Photograph of a water wheel in Syria in 1916 used here for irrigation purposes.

Humans have been harnessing energy from water for millennia, although not explicitly for electricity generation. The ancient Greeks used water wheels to grind wheat over 2000 years ago. Hydropower continued to be exclusively converted directly into mechanical power up until the end of the 19th century when electrical dynamos were attached to the shaft to generate electricity. Dynamos were the first type of electrical generator.

Hydroelectricity is generated at a hydroelectric facility which for large-scale generation includes a hydroelectric dam. At these facilities a dam holds back a large volume of water, creating a reservoir. This reservoir holds water at a higher elevation than the water on the downstream side of the dam. Compared to the water in the river, the water in the reservoir has a greater amount of potential energy. When a gate is opened at the top of the dam, the water from the reservoir flows through channels called penstocks down to the turbines. When the water reaches the turbines the potential energy it contains is converted into kinetic energy. This flowing water is then used to turn the blades of the turbine. As the turbines spin, they move a generator and generate electricity.

Although many hydroelectric facilities utilize dams, there are some types of systems that do not use dams and have very little water storage (meaning there is no large reservoir of stored water). These types of systems are known as run-of-the-river systems, and have been gaining popularity as an alternative to large-scale reservoir dams.[7]

Each type of hydroelectric generation method has an associated output classification based on its capacity and are outlined in the table below.[8]

Hydroelectric power stations produce significantly fewer greenhouse gas emissions than other electricity generation options, such as the combustion of fossil fuels.[9] The cost of operation once the dams and reservoirs are built is relatively inexpensive and these facilities can operate at very high efficiencies.[3] However, the construction of these dams and reservoirs can result in habitat loss for aquatic species and an increase in greenhouse gas emissions due to the decomposition of organic matter in the newly flooded reservoirs.[9] For more information on the ecological impacts of hydropower facilities, see: water quality degradation and environmental impacts of hydropower.

The mechanical energy derived from hydropower is considered high-quality energy and can be converted to electrical energy with near 100% efficiency. This is because there are minimal amounts of thermal energy transformation involved, though there are still minor losses associated with friction and inefficiencies in the transportation of electricity (as a result of factors such as resistance in transmission lines). Overall, this means energy from water can be converted to electricity and delivered to the end-user with efficiencies higher than 90%.