Waste heat recovery is the process of capturing and reusing the heat that is generated by industrial processes or combustion, which would otherwise be lost to the environment. This captured heat can then be used to generate electricity, heat buildings, or power industrial processes. Waste heat recovery can be applied to a wide range of industries, including power generation, petrochemical, and manufacturing, and can lead to significant energy savings and reduced greenhouse gas emissions.

Waste heat recovery can be done by using techniques such as thermoelectric generators, Organic Rankine cycle, and Kalina cycle systems, and heat exchangers. These systems can capture waste heat from sources such as flue gases, hot water, or steam and convert it into usable energy.

Overall, waste heat recovery can help to increase the overall energy efficiency of industrial processes, reduce costs, and reduce the environmental impact of these processes. 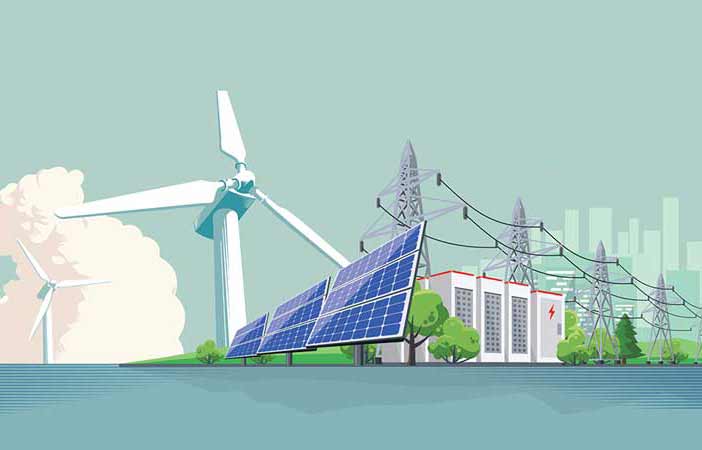 Renewable energy also called alternative energy or clean energy is the useable power that comes from renewable sources, such as the sun, wind, rivers, hot springs, tides, and biomass. Types of renewable energy include electric power generated by wind turbines, solar PV panels, biomass, waste-to-energy, and hydroelectricity [1, 2, 3]. While renewable energy is often thought of as a new technology, but the use of renewable energy has been started a long time before. Especially, harnessing the energy from nature has been used for heating, transport, lighting, and much more.

Renewable sources of power are traditionally included hydropower, land-based wind power, and solar PV. The emerging resources – such as marine, off-shore wind, and geothermal – will make a great impact on a sustainable energy future. Innovations and expanding renewable sources of power are critical for maintaining sustainable levels of power and protecting our planet from climate change. Supporting renewables, or using renewables at home, can speed the shift toward a cleaner energy future [1, 4, 5].

By tapping into natural heat beneath Earth’s surface, geothermal power can be used directly to heat homes, or for generating electricity. Geothermal heat can be captured and used to produce geothermal power using steam, which comes from pumped hot water beneath the surface, then rises to the top and can be used to drive turbines [4, 5, 6].

Hydroelectricity is generally more reliable than solar or wind energy (especially if it is tidal, not river-based), and also allows the energy to be stored to use when demand hits a spike. Another form of hydropower, which uses tidal streams twice daily to power turbine generators. In some situations, hydro may be most feasible as a commercial power source (depending on type, compared with other sources), but depending greatly on type of facility, can be used for off-grid, home-based generation. Commercial-grade wind energy generation systems can provide energy for a variety of different organizations, whereas individual wind turbines are used to help augment pre-existing power organizations. The term renewable expresses the nature of this kind of energy, which is available in spontaneously generated, infinite quantities, which are continuously renewed by nature, without any human interference. For example, a paper addressing development and characterization of a material to be used in a renewable energy system, without any measurements of the energy this new material would convert, would not qualify [5, 6, 7, 8].

By 2015, approximately 16% of total global electricity came from large hydroelectric plants, while other types of renewable energy such as solar, wind, and geothermal comprised 6% of total electrical production. In comparison, renewables at the start of the 21st century represented almost 20 percent of the global energy use, mostly derived from the traditional use of biomass, such as wood, for heating and cooking. Now that we have more innovative, lower-cost ways of harnessing and storing wind and solar power, renewables are becoming an even bigger power source, accounting for over an eighth of US generation. Hydropower is the nation’s largest source of renewable energy, although wind power is expected soon to supplant it [3, 4].

Businesses that have sustainability goals are also driving the growth of renewables, either through building their own facilities (e.g., solar rooftops and wind farms), procuring renewable energy via PPAs, and purchasing Renewable Energy Certificates (RECs). Some states are also including carve-outs–requirements that a specific proportion of the portfolio come from a particular source of power, such as solar–or other incentives to promote the development of particular resources. Renewable portfolio standards require electricity utilities to supply a specified percentage of their electricity from renewable or alternative energy sources by a specified date. Renewables are generated locally using systems or devices in place at where power is used (e.g., photovoltaic panels on public buildings, geothermal heat pumps, biomass-fueled combined heat and power) [9, 10].

There are five major renewable energy sources, which are: