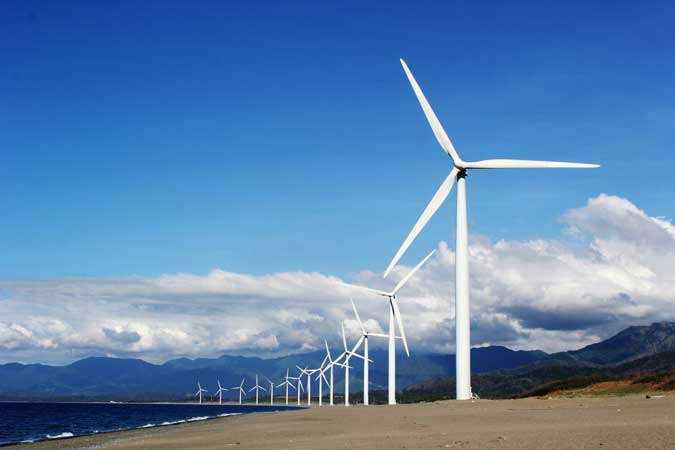 Wind power is the generation of electricity from wind. Wind power harvests the primary energy flow of the atmosphere generated from the uneven heating of the Earth’s surface by the Sun. Therefore, wind power is an indirect way to harness solar energy. Wind power is converted to electrical energy by wind turbines.

Several different factors influence the potential wind resource in an area. The three main factors that influence power output are: – wind speed,
– air density,
– and blade radius.
Wind turbines need to be in areas with a lot of wind on a regular basis, which is more important than having occasional high winds.

Turbines are designed to operate within a specific range of wind speeds. The limits of the range are known as the cut-in speed and cut-out speed. The cut-in speed is the point at which the wind turbine is able to generate power. Between the cut-in speed and the rated speed, where the maximum output is reached, the power output will increase cubically with wind speed. For example, if wind speed doubles, the power output will increase 8 times. This cubic relationship is what makes wind speed such an important factor for wind power. This cubic dependence does cut out at the rated wind speed. This leads to the relatively flat part of the curve, so the cubic dependence is during speeds below 15 m/s (54 kph).

The cut-out speed is the point at which the turbine must be shut down to avoid damage to the equipment. The cut-in and cut-out speeds are related to the turbine design and size and are decided on prior to construction.

Power output is related to the local air density, which is a function of altitude, pressure, and temperature. Dense air exerts more pressure on the rotors, which results in higher power output.

Wind turbines are designed to maximize the rotor blade radius to maximize power output. Larger blades allow the turbine to capture more of the kinetic energy of the wind by moving more air through the rotors. However, larger blades require more space and higher wind speeds to operate. As a general rule, turbines are spaced out at four times the rotor diameter. This distance is necessary to avoid interference between turbines, which decreases the power output.